The Friends of South Cumberland (FSC) are active participants in helping conserve and protect environmentally significant lands, both in and adjacent to the park.

When the FSC was established in 1993, South Cumberland State Park consisted of 11,000 acres.  Through the dedicated efforts of the Friends, working with other environmentally like-minded organizations, parcels of environmentally significant land were acquired and re-sold to the State of Tennessee. Today, South Cumberland and Savage Gulf State Parks protect over 31,000 acres of pristine Tennessee wilderness.  Many acres in both parks were added to the Tennessee State Parks system through the facilitative and/or direct efforts of the Friends of South Cumberland.

In the early 2000s, the FSC raised over $600,000 in donations and $2.5 million in grants with its "Saving Great Spaces" campaign to purchase critical holdings of land adjacent to the then-current park boundaries, protecting over 8,500 additional acres of pristine and environmentally significant lands. These acquisitions began a unique and productive relationship with the State of Tennessee that continues to this day.

Today, a major goal of the FSC is to protect the boundaries of the parks -- the bluffs, watersheds and viewsheds -- by acquiring or executing conservation easements on priority tracts of land.  Working with our Conservation Partner organizations, the Friends advocate for acquiring or protecting these tracts until they can be re-purchased by the State of Tennessee, and added to South Cumberland or Savage Gulf State Park.

FSC partners not only with the State, but has also joined with Tennessee Parks and Greenways, the South Cumberland Wilderness Society, the Savage Gulf Preservation League, the Land Trust For Tennessee, the Open Space Institute, Tennessee Land Trust, The Conservation Fund, The Access Fund, the Southeast Climbers' Coalition, Lyndhurst and Benwood Foundations, the University of the South, Monteagle Sunday School Assembly and the South Cumberland Community Fund, among others, to leverage our collective efforts, share ideas, and take action on high-priority land protection opportunities.

As you read this, FSC's work with its Conservation Partners and the State of Tennessee continues.  Over 1,000 acres are currently in negotiation or in the process of finalization, which will bring the combined size of South Cumberland and Savage Gulf State Parks close to 32,000 acres.  Here is information on some recently-finalized land transactions, and why they are significant additions to these magnificent Parks:

A panoramic view of a portion of Lost Cove. Click to see an enlargement in a new browser window or tab.
Lost Cove

The addition of Lost Cove, just south of Sewanee, has added just over 4,000 acres of high-quality forest land and critical natural and cultural habitat to South Cumberland State Park.

Lost Cove protects habitats critical for federally-listed endangered, threatened or federal candidate species, including the endangered Morefield’s Leather Flower and a population of Cumberland Rosinweed, a type of sunflower found only on the Cumberland Plateau in Tennessee. Vital habitat has been protected for more than one-third of all the federally-listed Painted Snake Coiled Forest Snails known to exist, as well as for two endangered animal species, the Eastern Small-Footed Bat and the Allegheny Woodrat. All of these species have been recorded on the property, along with Four-Toed Salamanders, Barking Tree Frogs, and Rafinesque’s Big-Eared Bat, which are all state-protected animals.
Watch this 10-minute video explaining how the Lost Cove tract was acquired, and some of the challenges facing a rapidly-growing State Park. 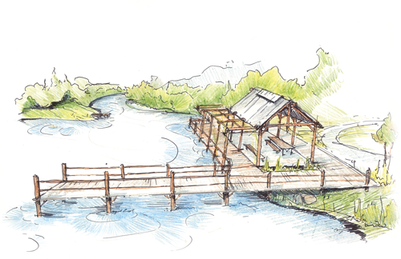 A significant addition to Savage Gulf State Park, with major implications for economic development, has been made in Beersheba Springs near Stone Door Natural Area. The property consists principally of the old Shady Valley Nursery — 700 acres of fields, woodlands, and a deep-water lake. The nursery entrance is on Highway 56, but its land extends more than two miles, all the way to the park boundary, and very close to the existing Stone Door parking area.

The significance of the purchase can be imagined if one considers recreational opportunities in the meadows that lead to the pristine lake at the back of the property. These possibilities and others drew several parties into partnership, including the State of Tennessee, through the Department of Environment and Conservation. Several Beersheba-area residents have also generously assisted financially, working through the Friends of South Cumberland State Park.

The local community, along with the Friends, TDEC officials and park managers, are in discussions about the planning and funding of facilities in the years ahead. Other adjacent land purchases could buffer the area and enhance development. All the parties are in agreement that the land itself remain or become as natural as possible and that the land use be sensitive to issues of conservation and the protection of Savage Gulf State Natural Area. A major goal is to draw more visitors and campers for extended visits, thereby also creating new opportunities for Beersheba Springs and Grundy County businesses, while allowing park visitors to enjoy paddling on the lake, hiking new trails on the property, and a variety of camping options. ​ 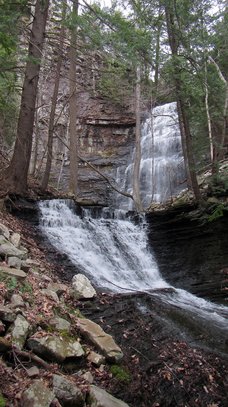 Denny Falls, in the heart of Denny Cove.
Denny Cove and the Dixson Tract

​Efforts to protect and preserve the southern end of Fiery Gizzard Cove took a big step forward in 2016 when the Access Fund and Southeastern Climbers Coalition (SCC), with help from the Friends of South Cumberland and other like-minded organizations, purchased 685 acres in Denny Cove.  At the end of 2016, the State of Tennessee purchased the tract from the SCC, and opened Denny Cove to the public in March of 2017.

Previously held by a timber company, Denny Cove is a nearly pristine tract with outstanding cliff-lines, making it a priority acquisition for climbing enthusiasts.  Denny Cove is becoming one of the region’s premier rock climbing destinations.  Over 150 world-class climbing routes have already been identified on the bluffs at Denny Cove.

The Access Fund and SCC have worked with the Park to carefully create access trails to the best climbing areas, and construct a parking area just off US 41, two miles south of the entrance to Foster Falls.  Both groups worked closely with South Cumberland State Park management and Friends volunteers to help insure that all improvements will be park-grade and environmentally responsible.

"It's a completely undeveloped tract of land," said Zachary Lesch-Huie, southeast regional director for the Access Fund. "We've worked closely with South Cumberland State Park to design these improvements from the ground up." The area also appeals to hikers who do not climb, with attractions like 70-foot-high Denny Falls. Primitive camping and trails to scenic overlooks are part of the future plans.

Not far from Denny Cove, the 1,000+ acre Dixson Tract was also recently acquired.  Learn more about the Dixson acquisition, here.