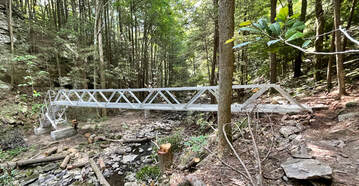 New Fiery Gizzard Trail Bridge now open
The replacement footbridge that marks the start of the Fiery Gizzard Trail in the Grundy Forest State Natural Area, about 3/4 of a mile from the Fiery Gizzard North trailhead, is now open.  The previous wooden bridge was washed out during heavy winter rains in early 2020. The new bridge, with all-aluminum construction, features a slightly longer span and aluminum piers, set in concrete; the new design is less likely to be impacted by periods of high water in the creek. Park Managers note that new approach trails on either side of the bridge are still being worked on, to connect the bridge with the existing trail system in this area of the Park.  They appreciated everyone's patience as this much-awaited piece of trail infrastructure was put in place.

Registration is now open for the upcoming year of the Tennessee Naturalist Program (TNP), to be held in and near South Cumberland State Park.

With a mission of teaching Tennesseans about our natural world, instilling an appreciation of responsible environmental stewardship, and channeling volunteer efforts toward education of the general public and conservation of Tennessee's natural resources, TNP consists of 10, four-hour courses held over two semesters, and covers a wide range of interesting topics and disciplines.

Topics include geology and ecology, plants, forests, birds, mammals, invertebrates, reptiles & amphibians, aquatic environments, nocturnal organisms, and naturalist skills.  Each class in the course features both classroom lecture and outdoor field components.  All classes are integral to the core course and may not be taken individually. In order to become a certified Tennessee Naturalist, 40 hours of volunteer work are also required.  There is a $250 tuition fee, per person, for the course.

Visit the Tennessee Naturalist program page on this website to register TODAY!  Class size is limited to the first 20 people who register online!

Contractors began removing trees June 28th on the Denny Cove Access Road, in preparation for widening and improving the roadway. This process is expected to take 2 to 3 weeks. Following that effort, and through July 31st, the National Guard will take over the project and bring in large earth moving equipment to remove tree stumps and create the improved access roadbed.

During this time period, the Denny Cove Access Road will be closed, with no public access to Denny Cove. This is necessary to insure a safe construction site, as many trees will be coming down to widen the one-lane road from Highway 41 to the Denny Cove parking lot, and large earth-moving machines will be in use to create the grade for the new road.  As a result, climbers and other visitors are NOT allowed to enter the area, but instead are encouraged to climb and hike at neighboring climbing areas like Foster Falls.

Winners will be named in each of several NEW categories, and the photos could appear on the Friends’ website, in printed literature, or on physical items produced order to raise money for projects facilitated by the Friends on behalf of the Park. By entering our contest and donating your photos to the Friends, you’ll help us tell the amazing story of the park and receive much-deserved recognition for your photographic talents!

Become a Trail Friend!
WHY: The park's most popular trailheads have seen a dramatic increase in visitors over the past year, and many hikers are ill-prepared for SCSP's trails.
WHAT: Trail Friends are volunteers who are positioned at some of the most popular trailheads in the park, offering hiking tips, trail updates and other useful information.
HOW: To learn more about becoming a Trail Friend, email Dave Matherly at dcmatherly@gmail.com or visit https://www.friendsofsouthcumberland.org/trail-friends.html
WHEN: Trail Friends work most Fridays, Saturdays and Sundays throughout the park's busy seasons. Two-hour and four-hour shifts are available.
WHERE: Trail Friends typically staff the Savage Gulf North (Stone Door) in the Beersheba area; Savage Gulf West (Greeter Falls), near Altamont; Savage Gulf East (Savage Falls), Fiery Gizzard North (Grundy Forest), in Tracy City; and Fiery Gizzard South (Foster Falls), between Tracy City and Jasper.
YOU SHOULD BRING: A friendly smile and a working knowledge of the trail. The Friends will supply the rest!  Share Your Photos of the Park!

The Friends of South Cumberland State Park (FSC) has elected new officers to serve during the 2021-2023 leadership term, and honors were given to two of its top volunteers.  Trae Moore was elected President.  Moore previously served as Vice-President and chair of the FSC Development and Membership Committee.  Tom Sanders was elected Vice-President, and will succeed Moore as chair of the Development and Membership Committee.  Bruce Blohm was elected as FSC Corporate Secretary, and also takes over as chair of FSC's Strategic Planning Committee, succeeding Rick Dreves, who has most recently served in both of those positions.  FSC also elected six new Directors:  John Collins, who will succeed Blohm as chair of the FSC Trails Committee; Dave Matherly, who will chair its Volunteer Resources Committee; and four At-Large Directors: Deb Dreves, Mary Priestley, Dr. Chris Van de Ven and Dr. Keri Watson.  Outgoing FSC President John Hille and Rick Dreves are closing out six years of service on the FSC Board.  Rich Wyckoff concludes a two-year term as FSC Treasurer.

FSC also presented Dreves with its highest honor, the Jim Prince Award, for his wide-ranging volunteer efforts, which included his work as Secretary and Strategic Planning chair, as well as former chair of FSC's Communications Committee, now headed by Susan Campbell.  Dreves has provided leadership on several FSC projects, such its 2014 committee structure reorganization; 2018 renovation and interpretation of the historic CCC Camp in Grundy State Natural Area, with Project Lead Rob Moreland; development in 2020 of FSC's Five-Year Plan; the recent creation of a series of historical and informational interpretive panels, now installed throughout the park; and an initiative to make it easier for Park visitors to navigate to SCSP's 12 trailheads, via a network of nearly 70 new highway signs that will be installed across the region, later this summer.  He plans to remain active as a member of FSC's Strategic Planning, Communications and Trails committees.

SCSP Manager George Shinn also recognized Blohm and Dreves with his Golden Shell Awards, recognizing their joint efforts to create and implement a location-coded mile-marking system, now being installed by the FSC Trails Team across 85 miles of SCSP trails; and ongoing leadership efforts to maintain, repair and rebuild sections of the Park's trail network. 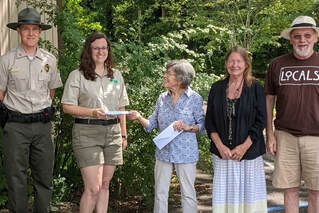 Park Ranger George Shinn, Caroline Holmes and MSPF board members Gerry Kaller, Lisa Luck and Sanford McGee.
SCSP Seasonal Ranger Earns $1,000 Scholarship
from the Mack S. Prichard Foundation
One of the objectives of the Mack S. Prichard Foundation (MSPF) is to encourage the preparation and training of individuals interested in the work of Tennessee State Parks as a profession.  In support of that objective, MSPF awards two $1,000 scholarships annually.  The Foundation recently awarded one such scholarship to Caroline Holmes, Seasonal Interpretive Ranger at South Cumberland State Park, stationed at the Stone Door Ranger Station.  As an NAI Certified Interpretive Guide, Caroline creates and presents programs that encourage participants to see how nature impacts their daily lives, and why conservation is essential now more than ever.  Congratulations to Caroline, and thank you to the Mack S. Prichard Foundation for recognizing her good work! 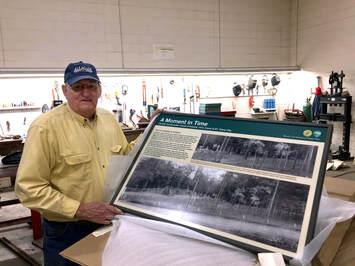 THC awarded 2021 Certificate of Merit Awards to organizations that completed preservation projects at historic locations across the state. These awards are presented each May during National Preservation Month. Since 1975, THC’s Certificate of Merit Program has recognized exemplary work by individuals, groups, organizations, corporations, or governmental entities to further promote historic preservation or the study of history in Tennessee. Nominations are solicited from the public in December of the preceding year and judged by category.

With the financial support of the South Cumberland Community Fund and other donors and volunteers, park rangers and Friends volunteers restored the site of CCC Company 1475 in 2019, where, during the 1930s, the camp was headquartered. The project identified, cleared and began to conserve some of the aging camp infrastructure, including foundations, cisterns and paths, and created a new interpretive loop that takes visitors to the most interesting areas of the site.

Click here to learn more about the trail: https://www.friendsofsouthcumberland.org/ccc.html.

John Greeter, 1936-2021
John Greeter, a member of the Friends of South Cumberland Board of Directors, passed away on March 13.  He was 85.  John has been active in the Friends' Land Conservation Committee, and had been involved with the Friends organization since its early days in the 1990s.  Prior to that, he was a strong advocate for the creation of South Cumberland State Park, arranging for the sale of his family's land, which included Greeter Falls, Boardtree Falls and the Greeter Homestead, to State of Tennessee in the 1970s. John received the 2020 Jim Prince Award, the Friends’ highest honor, for his years of dedicated service to our organization.
SCSP Introduces New Names for Trailheads

Please join us in saying Thank You
to all of our Sponsoring Partners!

Mr. Doug Ferris
​& Dot Neale
​Our Mission:
To aid and assist the South Cumberland State Park management and staff in meeting its objectives, and to inform, educate, engage, and inspire its members and the public to protect, conserve, and enjoy all the resources of the park.

​Why Should You Be a Friends Member?
Now protecting nearly 31,000 acres, South Cumberland is the second-largest State Park in Tennessee. Although this is great news, more land, and more visitors, creates new and urgent unmet needs for the park. Trails must be maintained or upgraded. Trail bridges require maintenance or replacement. Additional interpretive and wayfinding signage is needed. Guided hikes, seminars and workshops, including programs for area school children, must be prepared and delivered. And, the work of conserving additional environmentally-significant lands is far from complete. Your support makes possible the many initiatives of the Friends of South Cumberland State Park, a volunteer-driven, nonprofit organization, working to protect, maintain and enhance Tennessee's largest and most spectacular state park!

By becoming a member of the Friends, you can help insure that South Cumberland will always be a safe, well-maintained and amazing place to experience world-class natural beauty!

Funding for the Friends of South Cumberland is derived from individual and corporate memberships and from private donations.
As a 501(c)3 non-profit public benefit corporation, your membership and gifts may be Federally tax deductible.