Back the Rangers Program

The Friends of South Cumberland have an active volunteer program that supports the work of our amazing park rangers by conducting capital improvement, maintenance and trail projects throughout South Cumberland and Savage Gulf State Parks. Here are just a few of the projects the FSC has undertaken in order to "Back the Rangers"...

Fiery Gizzard Trail Re-Route
In 2015, the FSC took on the challenge of helping the rangers with the re-route of a key portion of the Fiery Gizzard Trail.  The FSC applied for and received over $28,000 in grants to purchase tools and materials for the project, and spearheaded the volunteer effort, which resulted in over 4,000 hours being logged by our dedicated volunteers.  The two-phase project resulted in nearly two miles of new trail being completed in about 18 months, traversing a challenging but beautiful area of the park.  The re-route included building extensive stone and wooden staircases, a large pedestrian bridge across McAlloyd Creek, and viewing areas for two waterfalls previously unseen by park visitors.  A portion of the new trail runs through a hand-carved "rock house" behind one of the falls.  You can view a series of videos, which chronicled the progress of the re-route effort.

Denny Cove Trail Building
During 2017, Friends volunteers turned their attention to the Denny Cove area, which, when acquired, had no trail access.  Working with groups from the Southeastern Climbers Coalition, Friends volunteers completed a trail to the base of the rock climbing area at Denny; and then, moved on to extending the trail all the way out to Denny Falls, a spectacular double-drop waterfall.  Denny Falls trail work involved building large stone retaining walls and routing the new trail through some challenging and environmentally-sensitive terrain.
Sherwood Day Loop Trail Building
Also during 2017, the acquisition of nearly 4,000 acres south of Sewanee immediately made the Lost Cove area a third major unit of South Cumberland State Park.  One of Tennessee State Parks' first objectives was to get a trail built on the property, so the public could begin to enjoy its latest wild land holding in the South Cumberland region. The trail is now complete, and open to the public! 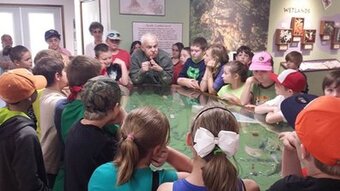 Visitor Center Renovations
In 2016, the Friends undertook a major renovation of the South Cumberland Visitor Center, which had been largely unchanged since the Center's opening in 1983. Renovations include new paint and flooring, new displays and lighting, video screens, and an interactive video microscope workstation.  Friends volunteers also assist with school group field trips to the Visitor Center, helping acquaint students with the wonders of the park!

Capital Projects in the Park
The Friends have invested in a number of capital projects within the park, including a picnic shelter at Stone Door (2015), a new playground at the Visitor Center (2015), a picnic shelter at the Visitor Center (2004), and, in partnership with the Monteagle Sunday School Assembly, a new ranger residence at Grundy Forest (2006).

Equipment for our Rangers
The Friends annually purchase vital items for the rangers that cannot be funded by the State, including mountain bikes; rescue/emergency equipment; rock climbing gear and related equipment, as well as helping with tuition for mandatory continuing education and recertification classes. 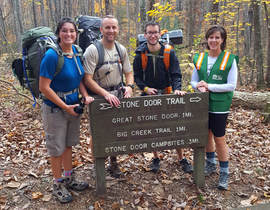 Trail Friends
In 2017, the Friends initiated a new program, "Trail Friends," at three popular trailheads in the park. Trail Friends are stationed at these trailheads during periods of high visitor traffic to welcome hikers, provide information and answer questions about that particular trail.

Work Days in the Park
The Friends, working under the direction of park rangers, conduct numerous work days to assess, repair and rebuild trails, repair and build bridges and improve signage.

​If you'd like to volunteer to help us "Back the Rangers," please let us know by completing our Volunteer Sign-Up Form!