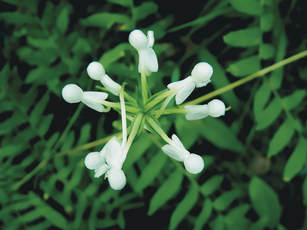 Savage Gulf State Park is home to a number of rare and endangered plants, one of which is the White Fringeless Orchid (Platanthera intergrilabia).  The Park is home to one of the largest remaining populations of these beautiful plants.

Ranger Aaron Reid reports that park staff, supported by Division of Natural Areas staff, counted 1,125 of the federally-protected plants at a remote site in Savage Gulf in 2018, compared to 24 plants at that site the previous year.  That is the highest number ever recorded for that site.

Platanthera integrilabia is generally found in wet, flat, boggy areas in acidic muck or sand, and in partially, but not fully shaded areas at the head of streams or seepage slopes.  It occurs mainly at elevations between 300 and 2,300 feet above sea level. Despite occurring across a relatively wide geographic range, Platanthera integrilabia is listed as "Near Threatened” because of continuing declines in its area of occupancy and number of plants in each area.

The plant has all but disappeared from North Carolina, where it was once thriving. At last count, there were between 50 and 60 existing subpopulations.  29 subpopulations have disappeared since botanists began monitoring the plant, mainly because of human actions that altered growing conditions, particularly with regard to soil moisture. Population declines plague some subpopulations, and today, many have fewer than 100 plants.

In our area, Platanthera integrilabia flowers from late July through early September. The flower bears an odd resemblance to a monkey’s face; hence, some folks call this the “Monkey Face Plant!”   Like many orchids, Platanthera integrilabia has pollen sacs which adhere to pollinators, transferring pollen from plant to plant. The percentage of individuals flowering within a subpopulation is generally very low, which is why the relatively large numbers of flowering plants in Savage Gulf this summer is so encouraging!

Watch the Tennessee Wild Side TV episode about the White Fringeless Orchid.