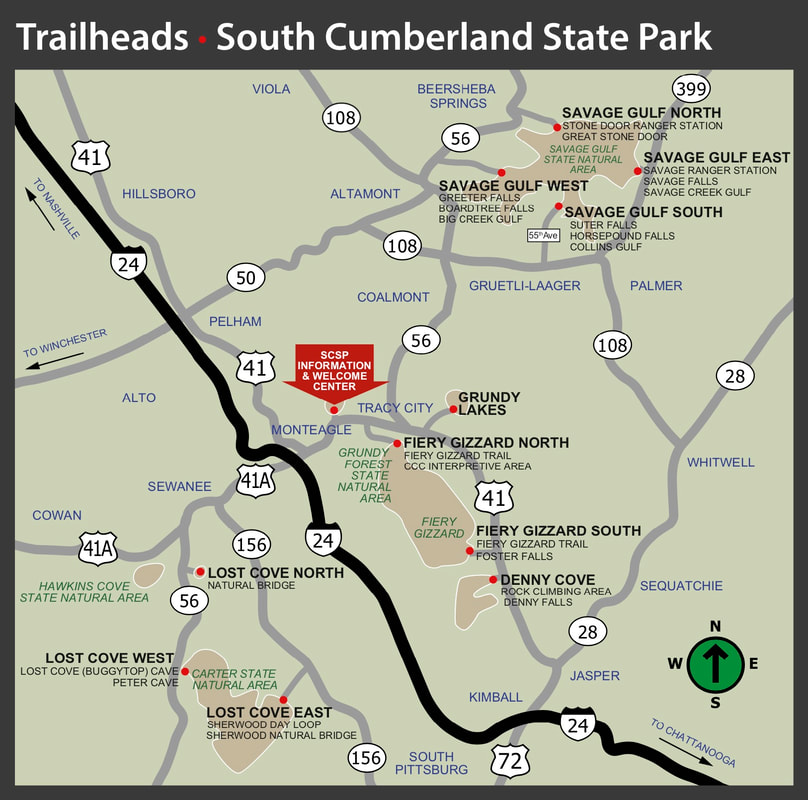 First and foremost:  South Cumberland is a WILDERNESS park.  Be ParkSmart!  Take a moment to be aware of this potentially life-saving information before you head out into the park!

South Cumberland State Park is comprised of nine discrete tracts scattered across Franklin, Marion, Grundy and Sequatchie counties, but is managed as a single park.  As a result, there are 12 trailhead locations from which you can access the different areas of the park.  The park tracts are generally clustered in three units:  Savage Gulf, in Grundy and Sequatchie Counties; Fiery Gizzard, in Grundy and Marion Counties; and Lost Cove, in Franklin County.

Detailed trail maps are available here, for free download, or in hard-copy form at the South Cumberland Information & Welcome Center, the Stone Door Ranger Station and the Savage Gulf Ranger Station. Or, you can ask for advice from the Park office (phone: 931-924-2980). You may also want to visit the Park's Events page to see a listing of scheduled, ranger-guided hikes. Our friendly Rangers and park staff are always available to help. All you have to do is ask!

South Cumberland State Park is truly a unique area of the Cumberland Plateau. This park plays an important role in protecting and preserving this area’s natural and historical objects that are important to this region’s culture. Visitors from all over the world travel to this site to experience its amazing nature and learn about this area’s history.

With the public’s support, South Cumberland State Park will be able to care for this area for years to come.

The Information & Welcome Center provides and excellent interpretation of the park's nine individual tracts, and highlights the area's history through exhibits, including a cabin, tools relating to the timber industry, photographs, maps, videos and other displays depicting the region's natural and cultural resources. A focal point is a cross-section of a coal mine, as mining was central to the region's economy during the 19th and early 20th centuries.  The adjacent grounds include a picnic pavilion, two lighted tennis courts, a playground and a wooded picnic area with grills and tables.

Lost Cove West/Carter State Natural Area (Lost Cove ["Buggytop"] Cave)
The Carter State Natural Area is in Lost Cove, the southwest section of the South Cumberland complex. Hikers can enter the area along the Buggytop Trail, a two-mile long route that leads to the Buggytop opening to Lost Cove Cave. All visitors to the cave are asked to respect the fragile ecology of this underground ecosystem, and stay out of the deeper areas of the cave during bat hibernation season, generally coinciding with cooler weather.  The caves are closed during portions of the year in which it is possible for humans to unintentionally pass white-nose syndrome, a disease lethal to bats, to the bat population in this cave.  Please respect the information you will find posted on the trail.

Lost Cove North/Natural Bridge
Accessible from State Route 56 and located in the southwest section of the park domain, the Natural Bridge is only a short walk from the parking area. A masterpiece of Mother Nature's handiwork, the 27-foot tall natural bridge has been artfully weathered from solid sandstone by natural forces.

Lost Cove East/Sherwood Day Loop
The nearly 4,000 acre tract, named for the area's most prominent natural feature, is a relatively recent addition to the Park, adjoining both the Carter State Natural Area (Buggytop/Lost Cove Cave) and the University of the South's Lost Cove Conservation Area.  This is an easy and rewarding 2.4 mile loop trail that includes a visit to the Sherwood Natural Bridge, unique rock formations, and several outstanding overlooks of the Tom Pack Hollow and Crow Creek valleys, including one of the longest overlook views in the Park, where you can see nearly 17 miles into Franklin County. In the summer, this is a cool and shaded walk; when the leaves are off the trees, the views are even more spectacular.

Hawkins Cove State Natural Area
The Cumberland Plateau is home to a large number of rare and endangered species of plants and wildlife. The Hawkins Cove Natural Area's 262 acres were set aside as a natural area in 1985 to preserve the rare Cumberland Rosinweed. At present, there are no trails or public access points on this tract. Additional information is available at the Information & Welcome Center.

Fiery Gizzard Trail
This trail features cascading streams, numerous waterfalls, panoramic overlooks, extremely rocky gorges, gentle slopes and lush woodlands. This trail is one of the most diverse and beautiful in the state and has been ranked as one of the top twenty-five backpacking trails in the United States by Backpacker magazine. There are three primitive campgrounds along the trail.

Fiery Gizzard North/Grundy Forest
In 1935 a group of Tracy City residents donated this 212-acre tract to accommodate a camp of the Civilian Conservation Corps, the remains of which you can see along the trail. It is the northern access point for the Fiery Gizzard Trail. For those looking for a shorter hike, the Grundy Forest Day Loop is a two-mile trek that carries hikers past numerous waterfalls, a plunge pool, old growth trees including giant Hemlocks, and cascading streams. Facilities include a picnic shelter and restrooms.

Fiery Gizzard South/Foster Falls
At Foster Falls you'll find picnic facilities and a seasonal campground for overnight visitors from April through October. Foster Falls, which lends its name to the area, drops sixty feet and marks the southern end of the Fiery Gizzard Trail. A portion of this area has become a world-class destination for sport rock climbing. Facilities include restrooms, a picnic pavilion, a ADA compliant boardwalk and viewing platform and a wooded picnic area.

Grundy Lakes
The Grundy Lakes area, which is just off U. S. Highway 41, immediately south of Tracy City, provides swimming and picnicking facilities in one of Grundy County's most historic areas. Grundy Lakes is the site of the Lone Rock Coke Ovens, where locally-mined coal was converted to coal coke by convict labor until 1896, and operated until around 1920. The coke ovens remain intact and may be viewed by visitors as historic reminders of those times. Facilities include a bath house. The Park has canoeing and classes available at various times. Check the current Park activities schedule for details.

Denny Cove
Denny Cove is nearly 700 acres, notable for its tall and beautifully-formed cliffs, which are considered world-class by recreational rock climbers.  Over 100 climbing routes are presently available to climbers; an online guidebook is available here.  There are both established sport climbing routes, as well as challenging traditional climbs. Climbing grades range from 5.8 to 5.14. The majority of routes in Denny Cove fall into the 5.11 to 5.12 range.  Much of the cliff line at Denny Cove extends above the shade of trees; therefore best climbing conditions will occur during cooler months.  For non-climbers, Denny Cove offers an excellent trail system, with a short spur to an excellent overlook of the Cove, and the Waterfall Trail, a 3-mile round-trip trek to double-drop Denny Falls, the signature natural feature of this area.

Savage Gulf State Natural Area
This tract of about 18,000 acres contains some of the most spectacular natural rock formations in Tennessee. Purchased by the State in 1973 to protect one of the last known stands of virgin timber in the Eastern United States, and other unique natural features, Savage Gulf has over 55 miles of trails and eight primitive campgrounds.

Savage Gulf East/Savage Creek
The Savage Gulf Ranger Station is the eastern access point to the Savage Gulf trail system; trails beginning here traverse some of the most rugged and scenic areas of South Cumberland State Park.  It is accessible off State Highway 399, between State Highways 108 and 111 on the Grundy-Sequatchie county line.

Savage Gulf South/Collins Gulf
SCSP protects the headwaters of the Collins River, one of Tennessee's largest and most scenic rivers.  There is an access point to Collins Gulf trails at the end of 55th Avenue in Gruetli-Laager, about three miles north of State Highway 108; these, in turn, connect to the other segments of the Savage Gulf trail system. Collins Gulf is notable for Suter Falls and Horsepound Falls, Schwoon Spring, as well as the historic McMinnville-to-Chattanooga stagecoach trail.  It is also a spectacular area for spring woodland wildflowers.
Some Important Reminders
All overnight camping requires advance online reservations.  Camp only in designated campgrounds.  Check-in time for camping is 12:00 pm (Central); check-out time is 10:00 am (Central). Your camping receipt or name associated with reservation MUST be placed in the dash of each vehicle that is parked overnight. If you will be camping overnight, you must park in either the Savage Gulf North (Stone Door), Savage Gulf South (Collins Gulf), Savage Gulf East (Savage Creek), Fiery Gizzard North (Grundy Forest) or Fiery Gizzard South (Foster Falls) parking areas.  Overnight parking is prohibited in all other areas.

The gathering of firewood is limited to dead materials on the ground. Don't bring in firewood from elsewhere; exotic bugs and diseases will hitch rides, and could easily infect/infest the fragile ecosystems of the South Cumberland region.  Fires are permitted in established fire rings only. Don’t move fire rings, burn trash, or leave a fire unattended.  Quiet Hours in all campgrounds are between the hours of 10:00 pm and 6:00 am.

Caving is permitted at Buggytop (Lost Cove) Cave in the Lost Cove area of the park.  All caving requires advance online registration, and is only allowed from June thru August to prevent the introduction of white-nose syndrome into the cave's bat population.  See the Caving Page of this website for more information.

Hiking after dark is against park rules. It is a risky proposition, particularly on this park's rocky trails. Bluffs and other steep drop-offs are extremely hard to see at night. That said, you might find yourself out in the park after dark: Accidents can happen; you might misjudge how long it will take to reach your destination; or you might take a wrong turn on a trail. Be prepared to hike out after dark if you have to. Even on day trips, carry a good flashlight with fresh batteries and a spare bulb, or even better, an LED flashlight. Using your smartphone as a flashlight is a bad idea; the battery will run down far too quickly to be a reliable light source, and it may be more important for you to be able to use the phone to call for help! If you don't have a flashlight, the best bet is to stay put, on a trail, and call 911 for help (if you can get a cell signal; many areas of the park are too remote to have service).  Be prepared to sit it out until dawn, or until someone finds you.  Our rangers and area emergency responders are very good, but SCSP is a huge park; so the more precisely you can describe where your car is parked, and what trails you recall using; the more quickly they can find you.

South Cumberland State Park is an ecological sanctuary, and all features, including plants and animals (living and dead), rocks, minerals, artifacts and fossils, are protected by Tennessee State Law. Leave them as you find them. Violators are subject to prosecution.

As in any wilderness environment, obvious hazards exist. Exercise care, stay on marked trails and be adequately prepared for backcountry trips. Filter all stream- and spring-sourced drinking water. Use extra caution when approaching high bluffs. Be careful with fires (only in designated campground fire rings!) and help keep your state park beautiful and natural.
Open Space Institute’s Earth Day presentation
features South Cumberland and SCSP
The Open Space Institute, one of our outstanding conservation partners,
chose to feature SCSP and the South Cumberland region as part of its Earth Day 2020 celebration.

Take a few minutes to scroll through the interactive presentation:
https://osiny.maps.arcgis.com/apps/Cascade/index.html